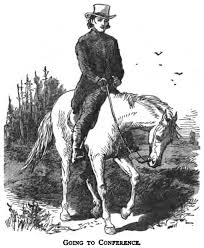 You and I are here today because of the sacrifices of people who for roughly 300 years refused to ask “what is in it for me?” and instead asked a different, perspective changing, question. One of the best examples of this is the early Methodist circuit riders. You see, we stand upon the shoulders and peer into our future because of the tireless work of circuit riding preachers whose life expectancy was less than 40 because of the constant exposure to the elements and a difficult lifestyle. These servants of God carried God’s message on horseback across this nation. Outpost by outpost. Town by town. City by city. Refusing to count the personal costs and instead giving all for the benefit of others. At one point, the Methodist movement was the largest denomination in the United States…by a large amount. We are a people whose heritage includes church planters, evangelists on horseback, community activists along with faithful caregivers of congregations among many, many others. All have one thing in common. We took and continue to take seriously Jesus’ command to:

19 go and make disciples of all the nations,
baptizing them in the name of the Father and the
Son and the Holy Spirit.
20 Teach these new disciples to obey
all the commands I have given you.
Matthew 28:19-20 (NLT-SE)